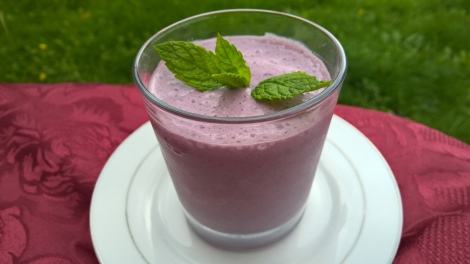 Charlotte is 16 years old, 5’7”, with chocolate brown hair, blue eyes, and weighing 125 pounds. She is the daughter of a retired Air Force pilot, her older brother Daniel died in the Iraq/Afghanistan war. She’s a gymnast and an average student. Loves Bruno Mars, Adele, and Linkin’ Park. Hates makeup and anything pretentious, being most comfortable in jeans, sneakers and t-shirts. She lives in a small brick house with her mom, dad and a dog. She’s dainty in appearance but doesn’t put up with any crap. She is a solid rock to David, and a patient listener. She is warm and kind most of the time but has a bad temper and can be bitterly sarcastic. She can be shy, emotionally vulnerable, but wears a cloak of wittiness and independence. A true romantic.

Charlotte likes fruit and light foods which is why this Blueberry and Mint Cheesecake Mousse is the perfect dessert choice for her.

This recipe is part of the series of Fallhollow Recipes I have created with author J.Keller-Ford for characters in her new book In The Shadow of the Dragon King, to be published in 2016. This will be the first book in The Chronicles of Fallhollow trilogy. See below the recipe to find out more.

– 2 cups frozen blueberries (fresh would work too!)
– 4 teaspoons powdered unflavored gelatine
– 1 cup evaporated milk
– 8oz cream cheese
– 3/4 to 1 cup powdered sugar (will depend on sweetness of the blueberries), sifted
– Fresh mint leaves (will need 12 leaves for the mousse recipe and extra to decorate)

1. Leave the blueberries to defrost, then puree them in a food processor or blender. Pour them into a pan, stir in the gelatine and leave for a couple of minutes. Bring to the boil, and boil for 1-2 minutes, stirring until gelatine is dissolved. Pour into a bowl and place in the fridge to cool while you prepare the rest.

2. Whisk the evaporated milk with an electric whisk on high speed until fluffy and doubled in volume, this will take about 15 minutes. Whisk in the cream cheese and 3/4 cup sifted icing sugar until it is completely smooth. Check for sweetness level and add the remaining 1/4 cup of powdered sugar if desired.

3. Add the cooled blueberries and mix till well combined. Very finely chop 12 mint leaves and mix them in.

5. Chill in the fridge for at least 4-5 hours. Decorate with mint leaves.

In the Shadow of the Dragon King, coming September 2016 – A seventeen-year-old squire with knightly ambitions reluctantly joins forces with a sixteen-year-old overachiever to slay a dragon, free the realm, and maybe even get the girl.

J. (Jenny) Keller Ford is a scribbler of Young Adult and New Adult speculative fiction. As an Army brat, she traveled the world and wandered the halls of some of Germany’s most extraordinary castles in hopes of finding snarky dragons, chivalrous knights and wondrous magic to permeate her imagination. What she found remains etched in her topsy-turvy mind and oozes out in sweeping tales of courage, sacrifice, honor and ever-lasting love.

When not torturing her keyboard or trying to silence the voices in her head, Jenny spends time collecting seashells, bowling, screaming on roller coasters and traveling. She is a mom to four magnificent and noble offspring, and currently lives in paradise on the west coast of Florida with a menagerie of royal pets, and her own quirky knight who was brave enough to marry her.

Find out more about Jenny here –