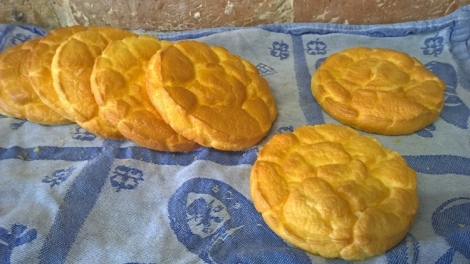 A couple of nights ago I was having dinner with a friend, and she mentioned that she no longer eats any grains, not even rice, and therefore creating baked goods is a particular challenge. I remembered a recipe I had tried making some time ago for Cloud Bread, which has no flour of any kind in it, incidentally it’s also very low carb if that’s of interest to you. When I’d made it back then it hadn’t quite worked for me, but after a couple more attempts this weekend, I have succeeded, and have some lovely light and fluffy cloud bread. I’ve slightly tweaked the recipe.

– 3 large eggs, separated
– 3oz cream cheese
– ½ teaspoon cream of tartar (not to be confused with tartar sauce, which is not the same thing at all) *
– pinch of salt

* Cream of tartar is an acid, it’s a byproduct of wine production, and its function is to stabilise the whisked egg whites so that they don’t collapse – you need the bubbles to stay bubbly for this recipe. As it’s an acid, it does give a slightly acidic taste to the recipe which I quite like, it reminds me of sourdough bread. If you don’t like that sort of taste though, you can reduce the amount – the original recipe only has ⅛ teaspoon, but I got better results with more.

2. Whisk the egg whites and cream of tartar together until they form very stiff peaks, this is best done with an electric whisk on high speed.

3. In a separate bowl, whisk the cream cheese until it is completely smooth (about 1 minute on high speed). Add the egg yolks and salt, and whisk on high speed for 5 minutes until it has slightly thickened and looks a little airy.

4. Gently, with a light touch, fold the egg whites into the egg yolk mixture. Do this by tipping all the white in, then using a large metal spoon, keep folding up and over from the bottom, down through the middle, turning the bowl. Do it only until it’s just combined.

6. Place non-stick baking paper onto two baking trays/sheets (or spray slightly with oil). Divide the mixture into 8 rounds, four on each tray. I used a 10cm cookie cutter and dropped the mixture into that to get nice even round shapes, but freehand is fine too. Notice in the picture below how they are holding their shape. If you have not folded your egg whites in gently enough then your mixture will be too runny and won’t hold its shape on the trays.

7. Bake for 25-30 minutes until they are golden brown all over, if they are still quite pale in places, leave it a minute or two more, better slightly over than slightly under with these.

8. Cool on a rack, then place in a sealed tub in the fridge. The first day you make them they are very fragile, it’s better to leave them till the next day to eat when they will be less fragile, and more bread-like. They should keep for a few days in the fridge.