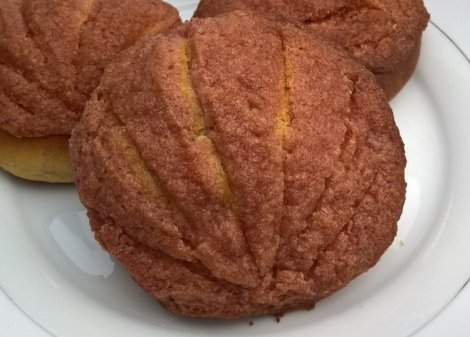 After returning from a recent trip to Mexico, Sue Slaght from Travel Tales of Life, one of my fave bloggers, got us to play a little game. She posted 10 pictures of food and dishes she had come across in Mexico, and 10 names, and asked us to match them up. Whilst playing this game, it dawned on me that my own Mexican cooking repertoire has never ventured beyond standard Tex-Mex fare (I’m guessing I’m not alone in that?), so I thought it might be fun to have a go at making some actual Mexican food, and what better place to start than from Sue’s list?

The first thing I decided to make from the list was Conchas, sweet bread rolls which are decorated to look like shells. I believe these are fairly well known in the States, but not so much here in the UK. I couldn’t find a recipe for the ones that look like the main ones on Sue’s picture but I learned they come in different flavours and colours and designs, so I eventually settled on this recipe from allrecipes.com. I tweaked the recipe very slightly.

Having never had Conchas before, I’ve no idea if these are how they’re meant to be, but they are certainly very yummy and I will definitely make them again. The bread has a taste similar to brioche, but with a denser texture, and the topping is crispy, buttery, and sugary. Anyway, I’ll get on with how I made them now…

For the bread rolls:

– 2/3 cup white sugar
– 1/2 cup butter
– 1 cup plain white flour
– 2 teaspoons ground cinnamon
– 1 teaspoon vanilla extract
– A little red food colouring (optional, you could use yellow, or none. Or do a mixture in the batch of some red, some yellow, some plain).

1. In a large bowl, mix together the yeast and warm water. Add the milk, sugar, melted butter and egg, then mix. Add the flour, and then using a mixer with a dough hook attachment, mix it for several minutes until it all turns into a smooth, elastic dough (I found I only needed about 3 1/2 cups of flour, even though the recipe calls for 4, so don’t add it all at once). If you don’t have a mixer with dough attachment, then do the kneading by hand for 6-8 minutes on a lightly floured surface.

2. Place the dough in a large greased bowl, turn it so it is greased all over, cover, and leave in a warm place to rise for one hour.

3. To make the topping, beat the sugar and butter until light and fluffy. Stir in the cinnamon, vanilla, colouring, and flour until you end up with a thick paste.

4. When the dough has risen, divide it into 12 and shape into balls. Place them on greased baking sheets, about 4 inches apart.

5. Divide the topping paste into 12, roll each piece into a ball, pat it out into a disc shape and press it gently on to the top of each roll. Cut deep lines into the top to look like a clam shell. If you just score the lines, they’ll disappear during cooking, so cut right through the thickness of the topping.

6. Cover over with lightly oiled cling wrap and leave to rise until doubled in size, about 45 minutes.

7. Remove cling wrap and bake in preheated oven 190C/375F for up to 20 minutes until lightly golden brown. Cool on racks. 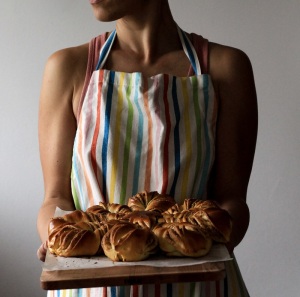