I’ve been excited about the thought of making this eclair cake ever since I stumbled across it on the Chef-In-Training site a few weeks back. The recipe uses several American ingredients which are tricky to get hold of in the UK, and even when you can get hold of them they tend to be ridiculously overpriced, so I’ve adapted it to ingredients more readily available here, but included notes on the American equivalent. My quantities are different too because of the different pack sizes of the comparative ingredients. Also, I clearly need some practice in the art of cutting perfect looking slices. The picture of the slice on the Chef in Training site looks like this: 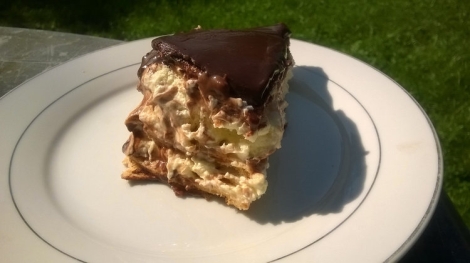 Seriously, how do you stop everything from dragging downwards when you cut into it? Anyway…

For the main part:

– 2 packs of vanilla whip dessert, in powder form, Angel Delight type, except that Angel Delight doesn’t come in vanilla flavour so I used Morrison’s supermarket own brand. Each pack was 47g, but I noticed that Angel Delight packs are 59g each, so other brands might vary, doesn’t really matter (Original recipe is 2 x 3.4oz packs Vanilla Instant Pudding mix).

– 600ml milk, or different amount if your whip packet says something else (Original recipe is 3 1/2 cups milk)

– Approximately 36 Ice-cream wafers, these are the type I used:

(Original recipe uses 2 x 14.4oz packs graham crackers. We are often told that we can substitute digestive biscuits for graham crackers, but I really didn’t think that would work in this particular recipe, so I figured that ice-cream wafers, once softened by sitting in between cream layers, might most closely resemble the choux pastry that is usually used for eclairs).

(Original recipe used half those quantities for the frosting, but in the write-up she said that she usually doubles the frosting quantity, so I just went straight for that – why scrimp on the chocolately bit right?).

Was that the most detailed ingredient list you’ve ever read? Just wondering.

1. Whip the cream until stiff (tip the bowl upside down and it doesn’t move).

2. Whip the vanilla dessert powder with the milk for about 2 minutes until thick and creamy, then fold it into the whipped cream.

3. Using a pan approximately 9 x 13″, place one layer of single wafers, you’ll need to break them up to fit.

4. Spread half the cream mixture on top.

5. Another layer of wafers.

6. Another layer of cream mixture.

Place in the fridge while you make the frosting:

8. Melt butter and milk together in the microwave until butter is just melted and liquid.

9. Sieve the cocoa and icing/powdered sugar into a bowl.

10. Pour the melted butter and milk on to the sieved cocoa and sugar and beat well together until smooth and glossy.

11. Pour over the top of the cake and smooth out. Refrigerate.

IMPORTANT NOTE – This really does need to be made the day before to give the wafers enough time to soften in the cream. The original recipe with graham crackers also says to make the day before. I initially made it in the morning and thought it would be fine by the evening, but it wasn’t, the wafers were still quite hard. By afternoon the following day they were better, still a little chewier than I might have wished though, but really not a bad approximation of choux pastry. Next time I might look for thinner wafers as these ones are quite substantial (oh yes, there will definitely be a next time).

If you like eclairs then this really is yummy and very much like eating eclairs, it’s perfect for a party, or if you are bringing dessert to a gathering. Even better if you can work out how to cut neater looking slices than I can! I think I’m going to need to experiment A LOT to perfect the wafer choice, the refrigeration time, and the cutting technique…